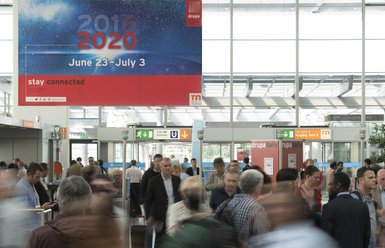 Scissor Hands, a cloud-based software that delivers smart cut programs in the bindery through integrated artificial intelligence, concluded an 11-day exhibition at drupa on a high note. Held May 31 to June 10 in Dusseldorf, Germany, drupa is the No. 1 global trade fair for the print and media industries.

“Exhibiting at drupa opened up the international market for Scissor Hands by a large volume,” he said. “This was, by far, the most well-attended edition in the last two decades. It was busier at this year’s show than the last four combined.”

Selling to both trade printers and print dealers, the company struck up agreements with eight European dealers by the end of the trade fair in countries including Romania, Bulgaria, Ukraine, Georgia, the Balkans, France, Austria and the UK.

Print buyers and trade printers looking for bindery automation will save time, money and manpower with Scissor Hands’ guillotine cutting optimization. The software uses artificial intelligence to program cutters for the optimal results in the last stage of automation.

Improved accuracy and efficiency in the bindery eliminates complex manual calculations. Printers are able to automate the programming of cutters and send production information back to the MIS systems; lessen cut times on gang cutting by up to 60 percent; increase overall productivity; and enjoy significant cost savings.

“It doesn’t matter how fast a machine can print, but if the job is not finished properly and shipped on time, the customer cannot be billed,” Fugate explained. “With Scissor Hands, the experience comes from the software, not the cutter operator.”

Journalists and attendees alike named the Scissor Hands’ enhanced JDF automation among the most impressive product demonstrations at drupa.

Winner of the 2015 Must See ‘Ems Award, Scissor Hands was chosen by a panel of industry experts as a leading innovation in cutting edge automation at GRAPH EXPO 15, a yearly exhibition for the graphic communications industry in print, online and mobile.